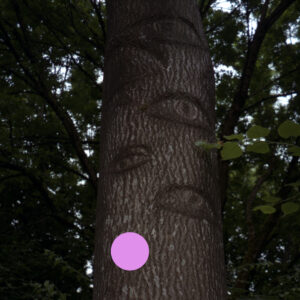 I spy… a disposable camera project is a mail art program created by UNIT/PITT Society for Art and Critical Awareness.

In 2021, six artists were each sent a disposable camera and a unique text prompt. They were instructed to photograph whatever they want, as long as one photograph responds to the prompt. UNIT/PITT chose nine unedited photos from each roll to showcase online.

Much like its car game namesake, I spy… was devised as an escape from confinement, in response to restrictions resulting from the COVID-19 pandemic. I spy… is as much a mission to capture a specific photograph, as to pass the time. With that in mind, the images in this exhibition document a series of discreet performances with backdrops ranging from hair salons to home gardens.

In 2021, UNIT/PITT also added something new to I spy… Inspired by the enthusiastic response to our call for crowd-sourced prompts, we hosted a community version of I spy… on Instagram throughout September. In anticipation of the photographs from our participating artists, we invited the community to show us the world through their lens for a month.

Thank you to Madison Lemke of Dev Drop for developing and scanning the film.

The photographs in the inaugural I spy… were taken between May-June 2020 by Gloria Wong, Jackie Dives, Jaz Whitford, Katayoon Yousefbigloo, Mona Fani, Phoebe Huang, Rachel Lau, Rebecca Wang, Ryley O’Byrne, and Svava Tergesen. These finalists were chosen through an open call for emerging and student artists by Sunny Nestler, Molly Randhawa and Eleanor Wearing. The prompts were composed by Samantha Nock.

Thank you to photographer Soloman Chiniquay for developing and scanning the film, and thank you to Mitch Lum for preparing this site for I spy…2020.

We are grateful to receive funding from British Columbia Arts Council, City of Vancouver, Vancouver Foundation, Audain Foundation, and our generous members and donors.